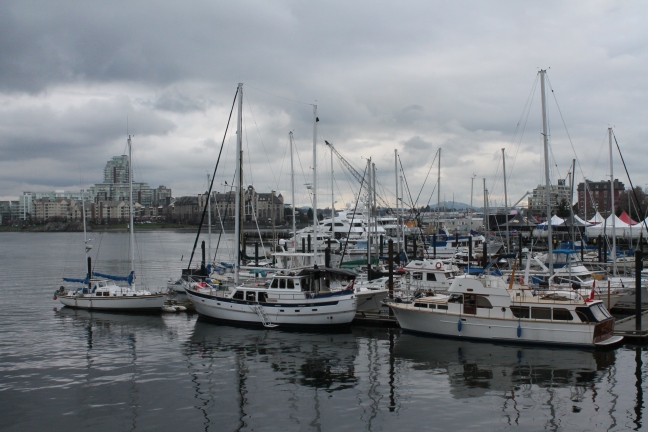 I’ve been to a lot of cities across Canada, but never this far west. I find myself in Victoria, the capital city of British Columbia.

Victoria is one of the oldest settlements on the Pacific Northwest, by the Brits in 1843. Wikipedia says it has the second oldest Chinatown, next to San Fran. The Salish Nation was here thousands of years before that.

It could also very well be the rainiest place I’ve ever been.

Through the raindrops I have managed to see some beautiful spots and take some photos. Guess the bonus to all the rain is how green everything is. The flowers are even in bloom! (and trust me, after -35 Celsius a couple weeks ago at home and the latest Snowmageddon, this is wonderful)

The BC Parliament building. Home to the Legislative Assembly of British Columbia. Final cost to build… $923,000. That little gold dude on top is Captain George Vancouver (Vancouver Island, Vancouver BC, Vancouver WA, and Mount Vancouver are all named after him). Apparently someone once tried to steal his statue by helicopter. 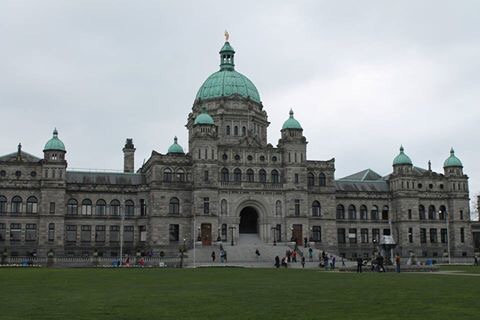 In front of the parliament building is a statue of Queen Victoria. Yes, the city was named after her.

Everyone has told me that I should have tea at the Empress Hotel. It was built between 1904-1908 and has hosted many notables, including Shirley Temple, Prince Edward in 1919, and King George and Queen Elizabeth in 1939. 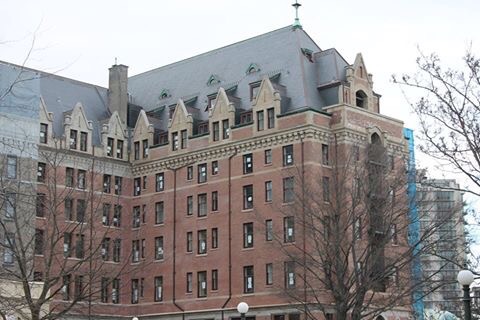 Honestly, I’ve never seen so many totem poles! I could take pictures of all of them, because they all tell a story. This has been my favorite so far. It’s the Kwakiutl Bear Pole, carved by Henry Hunt of the Kwawkewlth Indian Band in 1966, to commemorate the centenary union of the colonies on Vancouver Island and the mainland.

Perhaps the most spectacular place I’ve been (so far) is Beacon Hill Park. The park was named for the two beacons on Mount Beacon. The western most beacon had a triangle (blue) and the other a square (green). If the sailor could see the square through the triangle he was on Brotchie Ledge, which meant trouble. The almost 200 acres was originally set aside as a protected area by Sir James Douglas, governor of the Colony of Vancouver Island in 1858. In 1882, the land was officially made a municipal park and given its name. 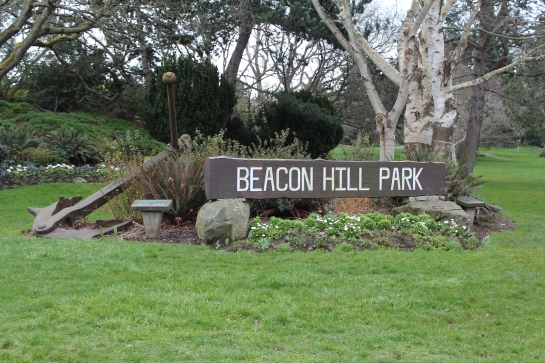 A leisurely walk through the park, and then along a hidden pathway you can find sets of wooden stairs to take you down to the rocks and ocean view of Horseshoe Bay. The rocks were glaciated about 10,000 years ago.

On a clear day you can see the mountains of Washington state.

After the stairs you have to navigate all the driftwood that has washed up. It’s slippery, and treacherous, but oh so worth it for this view….

It was a big day of walking (about 20 km), so time for a little break. More pictures to come!