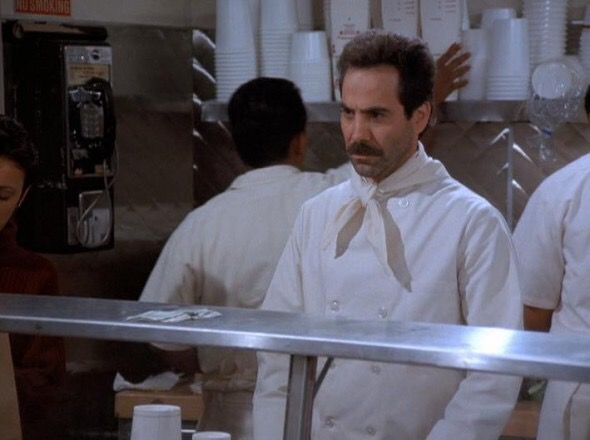 Most people can’t hear the words “mulligatawny soup” without thinking of the soup nazi from Seinfeld. “No soup for you!”

It always makes me think of this restaurant my aunt and uncle took me to in Salzwedel, Germany. Chinese buffet restaurant, owned by a man from India. The combination works, don’t ask me how.  I don’t remember anything else on the menu.

One of his soups was this mulligatawny. To. Die. For. My taste buds remember, so I’ve kind of been obsessing over this. For six months I’ve been trying to find a recipe that’s close.

I found this one:

Method
Combine the first 14 ingredients in your slow cooker. Cover and cook on the low setting 5 hours. Stir in the rice, cilantro or parsley, and coconut milk. Cover and cook 10 minutes more. Season the soup with salt and serve.

It needs a little work to match the taste perfection I had before, but this is quite yummy too. Not bad for a first shot at it! 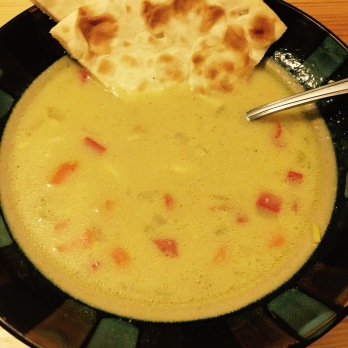 Well, actually no I’m not from Berlin. But I am going there, again. This will be my third time there. Vacation is booked for April. Yes, prepare yourselves for future touristy photos!

It will be my son’s 18th birthday, so we’re going on a mother/son trip. He’s never been to Germany, so I get to play tour guide. I’m so excited!! Flights, hotel and even the local transit cards are booked.

The last time I was in Berlin was in 1990. It was also the year the wall came down. I had been working in Flensburg that summer, visiting family on weekends. When the work contract was done my aunt and uncle asked me where I would like to go. There were only two places were on my list, Lübeck (home of Niederegger marzipan, which is AMAZING!), and Berlin. I wanted to see the difference from when I was there three years before. We went for a walkabout, and I still remember my uncle saying, “stop, stop!” and how much it confused me. “Look down,” he said. I happened to be standing exactly where the wall had once been. Goosebumps! After the wall came down there were, of course, the usual complaints about how the governments of both halves of the country managed the reintegration of citizens. Families were reunited after decades of separation. I didn’t find out until years later that our family roots (on my mother’s side) were from an area that became East Germany.

Berlin is a city that is absolutely rich in history. Founded in 1237, it became the capital of Prussia in 1701, the German Empire in 1871, then the Weimar Republic and the Third Reich. The city was divided by the Allies (USA, UK and France) and the Soviet Union under the London Protocol of 1944. East Berlin belonged entirely to the Soviets. It was too difficult to maintain West Berlin as the capital under a rotating Allied government and surrounded by Soviet territory, so West Germany’s capital was moved to Bonn in 1949. The nation’s capital unified again in Berlin in 1990.

I want to give that sense of deep culture to my son. He’s been to Montreal and parts of the U.K. Now it’s time for Germany.

Maybe he’ll become a Berliner too.

Everyone knows the song “Auld Lang Syne” by Scottish poet Robert Burns (1759-1796). We all sing this song on New Year’s Eve when the clock strikes twelve, the ball drops or the fireworks go off. But what the heck does it mean?

The first verse and chorus are understandable, but if you have a look at more verses, you know the song isn’t English. No wonder people don’t understand the phrase “auld lang syne”.  Translated, from the original Scots it was written in, it means “old long since,.” To us English folks, it has more the meaning “like old times.”

Just like everyone else I was singing this too, but why do we sing Auld Lang Syne on New Year’s?

According to vox.com: “One reason a random Scottish folk song has come to be synonymous with the new year is that New Year’s celebrations (known as Hogmanay) loom unusually large in Scottish folk culture — so much so that Scotland’s official website has a whole Hogmanay section, which notes that, ‘Historically, Christmas was not observed as a festival and Hogmanay was the more traditional celebration in Scotland.’

That’s because the Scottish Reformation brought to power followers of a Calvinist branch of Protestant Christianity known as Presbyterians who didn’t really care for Christmas. Indeed, in 1640 the Scottish parliament went so far as to abolish Christmas vacation ‘and all observation thairof,’ citing its roots in ‘superstitious observatione.’ When theologically similar Puritans briefly ruled England as a result of the English Civil War, they also attempted to suppress all Christmas celebration. But Presbyterianism put down deeper roots in Scotland, leading Hogmanay to displace Christmas as the number one midwinter celebration.

The end of one year and the beginning of the next seems like as good a thing to celebrate as anything else, so Scottish-inflected New Year’s celebrations — including the sentimental and appealingly nonspecific ‘Auld Lang Syne’ — came naturally to the English-speaking world.”

So the Scots like a good party, but why do the rest of us sing it too?

“From 1929 until 1976, first on radio and then on television, Americans tuned in to the New Year’s Eve broadcast by Guy Lombardo and the Royal Canadians, a big band act led by Lombardo, a Canadian whose parents immigrated from Italy. By the mid-70s, Lombardo’s broadcasts began to face serious competition from Dick Clark’s “New Year’s Rockin’ Eve,” which was positioned to attract younger viewers and emphasized the rock element to contrast with the Royal Canadians’ big band tunes. But for decades, Lombardo owned December 31 — even earning the nickname “Mr. New Year’s Eve” — and every single year he played “Auld Lang Syne” to ring in the new year.” (also from Vox)

Music and culture around the world are influenced by American movies and television, so the whole world saw people singing “Auld Lang Syne” on New Year’s. “An 18th-century Scottish ballad thus became a mid-century American television ritual, and from there became a worldwide phenomenon — even though almost nobody understands the song.”

Sing it with me, and remember to sing the chorus after every verse. Here it is in its entirety:

And surely ye’ll be your pint-stoup!
and surely I’ll be mine!
And we’ll tak’ a cup o’ kindness yet,
for auld lang syne.

We twa hae run about the braes,
and pou’d the gowans fine;
But we’ve wander’d mony a weary fit,
sin’ auld lang syne.

We twa hae paidl’d in the burn,
frae morning sun till dine;
But seas between us braid hae roar’d
sin’ auld lang syne.

And there’s a hand, my trusty fiere!
and gie’s a hand o’ thine!
And we’ll tak’ a right gude-willie waught,
for auld lang syne.